You probably read that title and fainted, right? 🙂

This weekend was the Rose State College Writer’s Conference in Oklahoma City. Along with the OWFI conference in May, it’s one of two that I get to attend every year (if I’m lucky!). I picked up some great tips (and, small brag, the first chapter of my work-in-progress Ghost Hunt took first place in the Fiction category in their contest!).

I attended a lot of great sessions, which I want to talk about in subsequent posts. But one of the best was from author Tamara Grantham on how to write great query letters. Let’s face it:  agents get too many submissions. WAY too many. In fact, from Word One, they are looking for a reason to reject you and move on to the next query.

And to tie back to my title, Tricia Skinner (an agent with Fuse Literary) said she knew for a fact that she had 350 queries waiting for her when she gets back home Monday. Yup. Three Hundred and Fifty.

Tamara gave us great hints from agent Janet Reid, who runs queryshark.blogspot.com , which has more than 250 query letters, ripped apart for your benefit. She will also rip apart yours, if you’re that brave! Here’s what I learned:

1.) Do NOT talk about ‘theme’ in your query letter. Your job is to entice the agent, not beat them over the head with a freshman Literature class.

3.) So how do you pull that off? Simple. You basically get 2 paragraphs to pitch your novel. Paragraph 1 should include:

4.) Your second paragraph should be your inciting incident, and where that leaves your MC. That’s it. Leave it there. Don’t tell the agent how the book ends. Don’t give them all the things that will happen in the middle of the book. Make them demand your full manuscript in order to find all that out!

(Hint:  this is a great way to check that you’ve actually got a pitch-able story. If you can’t answer these three questions, it’s time to revisit your story arc.)

7.) Have others read your query letter. Give them specific things to look for:  eliminate redundancy; strong vs. weak words; and most of all, that hook. Do they want more after reading this?

8.) This is not an overnight process! Tamara recommended drafting your query letter, then putting it away for about 4 weeks. Then, before you read it again, write a second query letter. Look at them together. Is one better than the other? Can you combine elements of both to create something even better?

Now, of course, sometimes our minds just don’t work the way we wish they would, and our novels may not fit into this rubric. If not, don’t fret. Remember the basic information you’ve got to get across. Then, shake it up a bit. As long as you get the agent hooked, you’ve done your job.

Practice with this. I’ve been mentally going through novels I know well, making them fit into these molds to see if I can do it for my own manuscripts. Take my favorite novel, Outlander, as an example:

Or another – let’s say, The Hunger Games:

It’s all about the craft. Crafting your query letter is no different than crafting that first page. If you’re like me and nearing the end of rewrites – boy, there’s a scary thought! – then this is a great way to double-check your plot structure.

If you can’t get your novel across in this amount of space, then maybe you don’t know your story as well as you think – or maybe your story needs some tweaking.

If you can – then congratulations! You’re on your way to writing a great query letter.

Sometimes, we get stuck. Stuck with flat tires, stuck in muddy ruts, stuck in dead-end jobs we hate, stuck with that last cold slice of sausage and mushroom pizza with the congealed grease on top. Stuck, stuck, stuck.

We get stuck when we write, too. We get stuck on a scene we can’t quite finish, or sometimes even on a sentence we can’t let go of. Sometimes we get stuck because we’re not quite sure where the novel is going – or because we didn’t know, when we started, just what the story would be.

I’ve been working on the same novel for nine years.

Yeah. I have to let that one soak in, too. But it’s true. About nine years ago, this novel idea came to me, with the characters, and it was in part based on some research I was doing at the time. At first, I thought it was a one-off, a single novel. Unfortunately, secondary characters sort of moved in and demanded rooms of their own. That, I realized, meant that the original idea was expanded and this was likely going to become a series. Then, my MC, Erin, demanded to speak in first person. That called for rewrites. Then, about two years ago, after already submitting to an agent and having my friends DEMAND that I quit and just publish the damn thing already, it occurred to me that there was a scene early in the book that made little sense and really should be its own book.

And so. The entire first quarter of the book got cut. I had to feel my way through the rest of it. This one little scene, that could just as easily have been cut, turned into an 81,000-word standalone work.

That’s the book I’m working on now. Scenes were cut. Rearranged. Rewritten. Added back in. Characters milled around backstage, thumbs in pockets, waiting for their cues. Rebecca – who may or may not have been a 17th-century witch – made an unwilling foray to the foreground, to become the focus of the novel, insisting the entire time that this was not her job and would I please figure that out already?

And about three weeks ago – I did.

I’d struggled with the rewrites all summer. I’d done everything I knew to do – I’d printed a hard copy. gone through it with pens and Post-It Notes, made a to-do list . . . and nothing was turning out the way it should. In short, I was stuck.

Then, blessedly, a revelation hit. As I sat amongst the ruins of my ink-spattered manuscript, wondering how the hell it had all gone so wrong and what I was supposed to do with it all now, a little random thought bubbled up from my subconscious:  Wrong focus.

And suddenly – I glanced down at the first page, and realized that the novel didn’t even start in the right place. We didn’t know Erin or Kai. We had no idea what Erin’s life had been like in the US. I needed a scene that I’d cut, and that scene had to be my opener. I sat down and spent about two hours totally rewriting that scene – and once it was done, I knew what I had to do.

Wrong freaking focus, indeed. I’d been so tightly honed in on Rebecca that I’d forgotten where my true focus was supposed to be – on my main characters, Erin and Kai. Their relationship. Their internal problems.  My focus wasn’t Rebecca. Rebecca was a catalyst, a way for Erin and Kai to work together while trying to iron out their own inner demons.

Not that I regret the wrong paths I took. Every single thing I know about Rebecca is necessary, and that wouldn’t have happened if I hadn’t told her story first.

And since that night, the rewrites have been going smoothly. It’s like my novel finally woke up and said, “Hey! Glad you figured it out, dillweed! Let’s go.” Now that the focus has changed, I see all the other small problems with the novel. Scenes are changing. Tension can be added. Transitions are smoother. Every time I sit down at the keyboard, I know precisely what needs to be done toward that end goal, and I walk away from the keyboard feeling good. I think this time, the novel may actually get done. I may be – for the time being, anyway – unstuck.

So if you’re stuck and aren’t sure why – I know this is a HUGE issue, and one I should have seen earlier, but if you’re stuck, take a look at your focus. Are you focusing on the right characters? Are you engaging readers in the true conflict? Are you telling the real story?

But – nine years on – I think I’m finally getting it.

I love to shoot flowers in black and white. Sometimes we get caught up in the colors and forget to look at the intricate structures – as with this large dandelion. 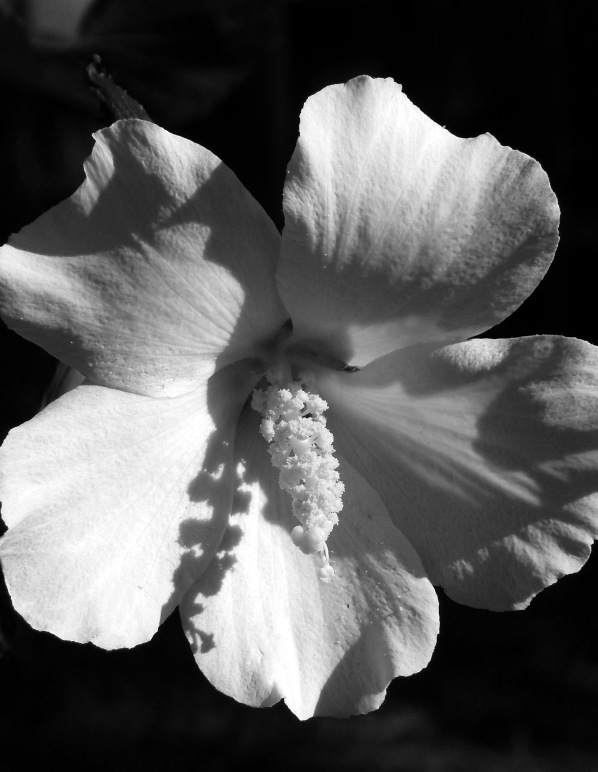 Or this Rose of Sharon.

Or this zinnia. In color, it’s a brilliant reddish-pink – but in black and white, we can see the structure of the petals, curled tight in the center, and gently unfolding near the edges.