The other day, I found myself at Walmart, staring with a feeling of growing panic at the rows of motor oil.

Yes. I said motor oil. Apparently Minis use a lot of oil. And if I screwed up and bought the wrong kind, I could kiss my engine goodbye. And since I’ve already replaced about half the engine components, I didn’t really want to do that.

I’ve wanted a Mini since 2002. Seriously, who DOESN’T? So freaking cute! Those little bug-eyed headlights, the grill that’s a perpetual grin, the adorable side mirrors that look like Shrek ears . . .

Oh yes. I was smitten. And I knew exactly what I wanted – Oxford White, black top, black side mirrors. I wanted the tan leather interior. I wanted the ‘flappy paddle gearbox.’ No reason. Just did. It sounded cool. Actually, that wasn’t what I wanted at first. The first Mini I fell in love with was this cute 2005 base model, with the black and tan interior. She was gold and white. I. Loved. Her. Still do. Named her Penny. Test drove her twice. Then she got totaled in a hail storm and the dealership shipped her off to the junkyard.

Then last spring – almost a year ago – my beloved Saturn L200 died at 351,000 miles. I cried. I was in class when I got the call. I cried anyway. Then I spent the next five months searching for Exactly The Right Car. I wanted a Mini. If I absolutely had to buy a new car, it was going to be my dream car.

Ever notice how dreams so often turn into nightmares?

It was August and I was still driving my dad’s spare truck when I finally saw Tally. She was three hours away. A 2009 Clubman, tan interior, the S model. Dual exhaust. I test drove her. I loved her. I was desperate and lonely and I fell in love and I didn’t care what her past was or what she might have done before I met her. It didn’t matter, I told myself as I signed the check. Tally was mine. MINE!!!!!

On the way home, the radio started to act funny. I thought it was odd that I couldn’t seem to tune it, but I figured I just didn’t understand it. I’d figure it out later.

A week later, it rained. Inside the car.

Yup. I opened the door to see water all over my dash, and the center console. Dripping down the front of the radio. Pooling in the cup holders. Apparently, whoever had replaced the windshield had never actually glued it to the car. So when it leaked, it took out the speedometer/radio component and my remote keyless sensor.

A week later, she started to overheat.

That was the entire cooling system. She did make it most of the way to Wichita before going into the red. As I recall, we replaced the water pump, thermostat and housing, the water pipe, and something else really expensive. She was there for nearly two weeks.

A week after that, in the drive-through one morning, I hit the switch to roll down the window.

I hit it again. Nothing. Then for some reason, I pushed it up – and the passenger side window went down all the way. And stayed there. Eventually, after a great deal of hitting switches, both windows rolled down and stayed there. Back we went to Marcus, who diagnosed a bad computer module (it couldn’t be a simple computer module. NO. No. This was the Mother of All Computer Modules, the one that controls ALL the interior switches.). Replaced. All good. While there, I had the brakes done because, well, they were metal-on-metal by that point.

All seemed good. Then, in December, we had a cold snap. Flurries. Wind chills in the teens. That’s when I got the bright idea to roll the windows down. They stayed down. All day. By the time I got off work, the temperature was about 21, with a wind chill of 14, and it was starting to snow.

Now by this time, you might be asking yourself, why not just put a sheet of plastic or a blanket over the door frame and at least block the wind? That’s an absolutely brilliant idea. Except Minis haven’t got door frames.

So I drove home nine miles like that. Windows down. Overcoat buttoned to my chin. A wool blanket over my legs and a scarf tied over my head like some 1950s starlet. News flash:  that does not help when there’s a 14-degree wind chill. Every single person I passed on the highway just stared at me. Then I had to cover the car with horse blankets and stick it in the barn to keep the snow out of it.

I live in fear of the next thing going wrong. Actually, that fear came true last night when the Check Engine light came on. She’s at the dealership now, even as I type, with the latest loaner car in my driveway instead. At least I get nice loaner cars.

So if you, too, have been bitten by the Mini bug, here are some tips:

1.) Buy your own flatbed tow truck. You’ll save a LOAD of money. Believe me.

3.) The more parts you have, the more parts you have to break. Forget the S model. Yes, that turbo is FUN, and I LOVE when big-ass truck idiots idle next to me and rev their engines, and then I waste them off the line. But. Remember that ‘flappy paddle gearbox’ I just had to have? I’ve never actually used it. Why? Because I’m convinced that if I do, I’ll break the transmission.

4.) In all seriousness, never buy a Mini from a used car dealership. No matter how freaking cute it is. Only buy from a Mini/BMW dealership. Will it cost more? Yes. Will you save money in the long run? Quite possibly.

5.) Never ask how much a part is. Just hand over the credit card. Never look at your balance. Just assume that whatever the part is, it would cost less to buy a black-market SCUD missile and use it on your Mini.

6.) Enjoy all those times someone says “OMG it’s so CUTE! Is that a Mini? I love it!” Cherish them. Remember them as you’re limping along at 45 on the highway one day with your Check Engine light on, praying the car makes it to the dealership before catastrophic engine failure occurs.

7.) In fact, just consider buying a house a block or so away from the dealership. You’ll save money in the long run.

8.) Also, in all seriousness, remember that Minis do need premium gas to run right, and they DO burn oil. Even new ones. It’s just their nature.

I love my Mini, I really do. She’s great for hauling everything (and I mean everything – she’s a true British estate car). She’s fun and sporty. She’s damn cute.

But as I stood there in that Walmart, frantically searching for the right kind of oil, I had to ask myself – was it worth it?

One of the cool things about Kansas is that you literally never know what’s coming up next. Storms can pop up out of nowhere. Three-foot long copperheads can cross your path. The dog brings you a live armadillo. (No, the armadillo wasn’t happy. Yes, I made the dog let him go.) Life’s just full of surprises.

Lots of photographers I know just love to go out driving. Saturday afternoon, pack up the car and hit the road with a map and hope the cell service holds out – just to see what’s on all those dirt roads. Last year, I headed east of Winfield looking for a 1920s bridge that was about to be torn down. I didn’t find the bridge – I was late by about a day – but as I was trying to find my way back, I saw a chimney off in the distance. The closer I got, the cooler the place looked, until finally, I could see it.

Or what was left of it, anyway.

Surprisingly, it’s STILL THERE! Or was the last time I drove out to see it, anyway. I honestly don’t know how, though.

Here’s a close-up of the second story: 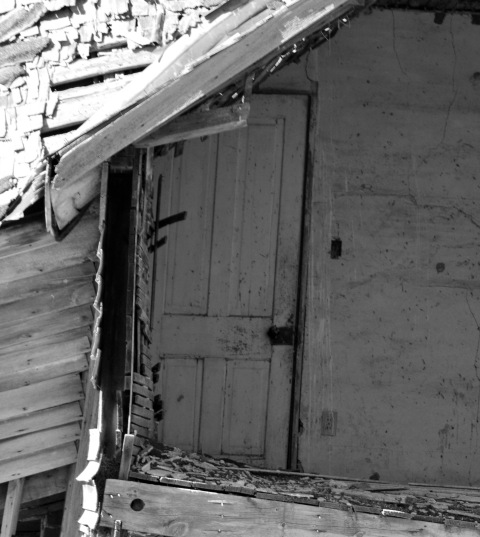