About a month ago, I walked into my local coffee house and saw a sign on the wall announcing a local author who would be doing a book signing soon. That’s cool – but we’ve frankly got a lot of local authors, most of them self-published. What stopped me in my tracks was the cover: 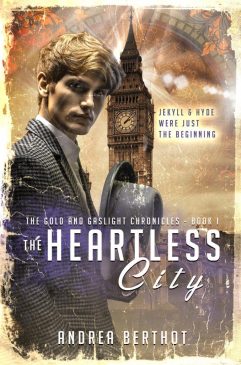 Yeah. Remind you of anything? Maybe this? 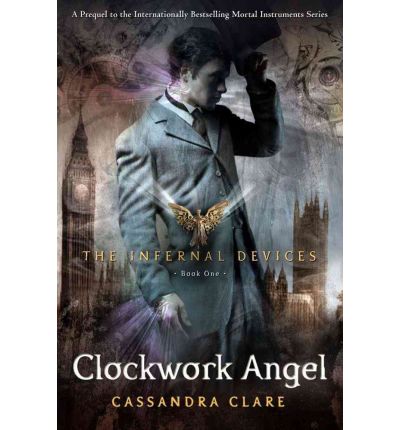 The Infernal Devices trilogy is my favorite Young Adult series ever (so much better than Mortal Instruments – more depth, more character development, more conflict!). So I had to go.

Andrea Berthot lives right here in my home town, and she was gracious and lovely. When I admitted the reason I was curious about the book was due to the cover, she laughed and said she loved it for that reason, too – when they asked her what she wanted for the cover, the only thing she could think of was a boy and the London skyline.

And she plays the ‘what if’ game. For her first novel, The Heartless City, it was a historical and fictional question:  what if Dr. Jekyll was real, and what if his experiments didn’t end where Robert Louis Stevenson said they did?

The Heartless City is the first book of Berthot’s Gold and Gaslight Chronicles series. It’s a re-imagining of the Jekyll and Hyde tale. It starts in 1903, thirteen years after Dr. Jekyll’s experiments went horribly wrong, resulting in the creation of more Hyde-like monsters – and a total quarantine of London. No one out. No one in. The Lord Mayor has taken over as a quasi-king; Parliament has moved to York; food is rationed and no one has news of the outside world.

In this world lives Elliot Morrissey, the son of the Lord Mayor’s personal doctor, and his best friend Cam (the Lord Mayor’s son). Elliot, due to a misbegotten experiment of his own, is an empath – he can feel every emotion of every person around him. Handy, when there are monsters to avoid. Not so handy, when people desperately need to hide certain things.

After going to a ‘dance hall’ for Cam’s birthday, they meet Iris, who is also not what she seems to be. Together, the three will have to figure out if there is any way to cure the Hydes – and who has a vested interest in not curing them.

As a writer, it’s difficult to review books – I always want to offer constructive criticism, as if I’m nothing more than a beta reader and there’s still time to change things! I think it’s more difficult for writers, in fact, than people who are only readers. Those who don’t write really don’t understand the amount of work that goes into writing a novel. The hours you spend on research, putting fingers to keyboard, editing with red pen in hand – those are hours you’ve chosen to subtract from other areas of your life.

So writers have a bit of empathy for fellow writers that often stays our hand when we might otherwise be harsh. Because we can read a scene and even if it doesn’t sound quite right to us, we know that the author probably spent hours and hours and hours in rewrites on it. We also know that agents and editors have to have their say and (I know this is heresy, but . . .) those changes may not always be for the best.

There was a lot to like in The Heartless City – the friendship between Elliot and Cam, the way Berthot handles the overwhelming emotions Elliot feels, and his real conflicts about what to do about it. Philomena sparkles on the page as the comedy relief/bad-ass girl rebelling against her heritage and station in life. Iris – well, truth be told, I’m still unsure what I think of her; sometimes she didn’t feel ‘real’ to me. It’s Cam and Philomena that most resonate on the page – Cam’s desperation to know more of the outside world – to be freed of the hell that London has become – is palpable and I sympathize with it completely. (Truth be told, I found Cam more interesting than Elliot, and I hope that the third book will focus on him.)

The story flows smoothly, though I admit I did lay it down for several days after about chapter 4 – it felt a bit slow to begin – and the Hydes seem to get lost after a time. The main antagonist is believable – a bit two-dimensional, but we all know people like this (cough-Trump!-cough), so that didn’t bother me too much, either. Honestly, part of me prefers a villain I can just hate. 🙂

One of the things I disliked about the book was something that I dislike in a lot of YA – or even a lot of adult books, for that matter – which is what I call “Twilight Romance Syndrome” (TRS, for short). This is when the two main characters fall in luuv instantly, without knowing the slightest bit of information about the other – basically the idea that “he/she is hot, he/she is fascinating/brooding/unavailable, so I MUST fall in love with them NOW!” Thus it was with Elliot and Iris, who were declaring love after only knowing each other for a few days.

I’ve posted about this particular pet peeve of mine before, and I’m sure I’ll do so again. Authors, please, do us all a favor:  your characters can fall in love all they want, but for heaven’s sake, let them do it gradually! Make it real. Make it believable.

For some reason, I actually found Cam’s romance with . . . um, someone, must not give too many spoilers! . . . more believable, maybe because I saw it coming a mile away. Or maybe because it was hinted that this romance had developed over the last several weeks or months – again, gradually.

Rant over. Back to the review:

One other thing I think Berthot could have worked on more was her use of language, particularly dialect and accent. Anyone who’s read a lot of Victorian literature knows it’s a very specific style of speaking (and the upper and lower classes had their own ‘dialects,’ even), and since London had been under quarantine since 1890, I would expect much more Victorian-esque speaking. But except for a bit of Cam’s good-natured jests, there wasn’t much of that here. The characters don’t even sound particularly British. If you watch any good British shows like Downton Abbey or Doc Martin, you get a feel for how true Brits speak – the rhythms, the sentence structure, the words. There just wasn’t any of that here, and that’s something true Anglophiles need. (A good example of someone who does this well is Naomi Novik, whose Temeraire series is set during the Napoleonic Wars.)

But overall, as a debut novel – especially one in the alternate history/paranormal realm – it’s a good first effort. Solid characters, solid plot, solid writing. And in the age-old game of ‘what if,’ it excels.

The second book in the series, The Hypnotic City, which follows Philomena’s adventures in New York City, is available.

A link to the Curiosity Quills Press’s homepage for the Gold and Gaslight Chronicles:  https://curiosityquills.com/series/gold-gaslight-chronicles/