A couple of years ago, there was a question posted on one of the writing forums that I belong to:  can we actually learn anything about the writing craft from watching movies and TV shows?

The person who posed the question was hard-core NO. In fact, the question wasn’t really a question as much as a challenge to prove her wrong. As I recall, it blew up into one of those multi-page virtual fistfights before the mods shut it down, because many people were arguing that there’s a lot you can learn from other forms of writing.

We always say that in order to write well, you have to read. But what about our other guilty pleasure:  TV and movies?

I say YES! If you’re willing to study them, that is. 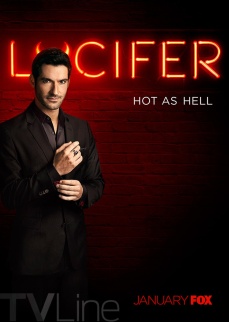 Lucifer. OMG, I love this show and the reason why is the characterization. Yes, the one-liners are great and I’m sorry, but the Prince of Darkness as a tall, dark, gorgeous Brit is just icing on my fantasy cake. 🙂 But this show takes the basic premise most of us have grown up with and does a 18o with it. Lucifer is charming, suave, elegant. But he also sees himself as both the hero of his own story, and the victim. It’s a coming-of-age story with a twist. He doesn’t see himself as the rebellious archangel gone bad. He sees himself as a son, unfairly treated and abandoned. (The show is also based on some work by Neil Gaiman, so . . . if you needed another reason to watch, there you are!) If you want an example of how the traditional villain views himself – this is the one to watch.

Dead Poets Society. My Philosophy class just finished watching this, and I was reminded anew of how perfectly this story unfolds and draws you in. Sure, it can be difficult to do in writing what movies can do in visuals – set the scene, drop a few hints and clues as to what’s going on – but it’s certainly something to strive for. From the opening minutes, we know we’re at a boys’ boarding school; from the cars, we see it’s the 1950s or 60s; and the convocation clearly demonstrates what the school’s motto is:  tradition, discipline, excellence. We know these are going to be part of the plot; it’s a great foreshadowing technique. We also see quite a lot of book-ending in this movie. Take, for instance, the first class in which Mr. Keating (Robin Williams) has the boys rip out the introduction to their poetry books, and encourages them to stand on their desks in order to see the world differently. Then – that last scene (that always leaves me in tears!), when the headmaster orders them to read the introduction – which they can’t do – and then, when Keating comes back to the classroom for his items . . . the boys stand on their desks in salute to him, even knowing it will result in their expulsion. The lesson is learned, for them; tradition, discipline, excellence have given way to something else.

Dirty Dancing. Yes, I hear the groans, but again – the character development! Watch it again, and not because those of us in a certain generation still consider Patrick Swayze to be one of the most beautiful men ever. Study the characterization this time, and how the different plots weave together seamlessly and merge in the ending. Look at the themes and the symbolism, like the lift. The lift is about trust, which is one of the reasons why Baby can never do it – until the very end. And watch how the different characters evolve and change, even the minor characters like Lisa. (For this, you need the full version; I swear I see new scenes in this movie every time I watch it!) And watch how the characters’ internal struggles are actually more important than the external forces acting on them. There are no real villains in this story – not even, I would argue, Robbie the Creep. Yet there’s conflict.

The X-Files, Doctor Who, and Supernatural. Yes, I just love them, but . . . even if you’ve never seen them, go online and read synopses of the seasons. What do you see? Story arcs! (Okay, to be clear, I’m talking about The X-Files the way it used to be, not that 6-episode whatsit that Chris Carter gave us in January.) Doctor Who is probably the best at this, back in the days of Russell T. Davies. Clues left in the first episode were perfectly slotted into place in that last episode. Some carried over into the next season, even. For example:  River Song. We firs meet her in “The Forbidden Library,” with David Tenant’s 10th Doctor. She clearly knows him, and knows him well. The question is, how? We don’t really know . . . until three seasons later! Look at the first season of Supernatural. Sam and Dean have two goals:  find their father, and hunt down the demon that killed their mother and Sam’s girlfriend. Yes, there are stand-alone episodes in which they are hunting monsters, but everything comes back to focus on those two goals.

In fact – I think most writers should study how TV series are structured. Study episodes. Look how they open; look at the resolution. Look at all the conflict in each one. Study the flow. Can you make your chapters do this? You should! The best-written chapters, especially for thrillers and mysteries, end on mini-cliffhangers. Never let the reader go. Each chapter should work hard to move the story and all the plotlines forward.

You may not like shows that I do, or movies that I do – but start studying your own favorites. If you’re a writer, chances are that you already like well-written shows with great characters and excellent story telling – you just might not be aware of it. Yet! 🙂