I have a confession to make:

I hate Romeo and Juliet.

It was required reading in high school, of course. In class, all the other girls were swooning over Juliet and how much Romeo loved her and just googly-eyed and – blech. Not me. No. I was in the corner rolling my eyes; the teacher caught me and said, “Robyn, what’s your take on it?” And I said, flat-out, “They were stupid. All Juliet had to do was marry Paris. He’s old. He’ll die sooner or later, she’ll inherit his fortune, and then she’s free to marry Romeo and be wealthy. They were stupid. Both of them.”

Long silence, followed by a few whispers. I held my ground. I still do. Romeo and Juliet are the two most stupid characters ever written. Paris would have died ere long. Heck, if they were really intent on being together, they probably could have poisoned him to death. Who’d have known? It’s not like there was CSI:  Verona, after all. 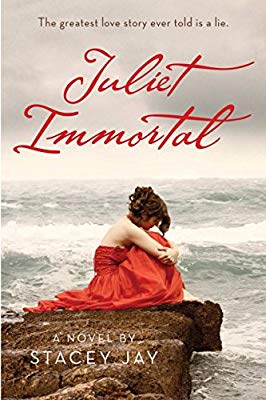 So when I was looking for a book for my ReadICT Challenge that was a classic, or the retelling of a classic, I stumbled across Juliet Immortal by Stacey Jay. After reading the basic premise – “Juliet Capulet didn’t take her own life. She was murdered by the person she trusted most, her new husband, Romeo Montague, who made the sacrifice to ensure his own immortality. But Romeo didn’t anticipate that Juliet would be granted eternal life as well, and would become an agent for the Ambassadors of Light. For seven hundred years, Juliet has struggled to preserve romantic love and the lives of the innocent, while Romeo has fought for the dark side, seeking to destroy the human heart. Until now” – I was hooked. See, I knew that Romeo was a no-good rat!

Sometimes, when we read the premise of a book, we have an idea in our heads of how that book should be written. For good or bad, those words take on a life of their own, creating a world in our minds that the author may or may not have meant for us to create. Such was the case with this book. In reading the premise, I had created a world in which those seven hundred years would be showcased – maybe not all seven centuries, but enough to show us the depths of their hatred, the passion for their respective roles, the continuous interactions.

This was not the case. And I’m not saying that what Jay wrote is bad – no, far from it! Just that it didn’t quite meet the expectations I’d created in my mind, which did cloud my reading of it slightly.

Juliet Immortal is set in modern-day California. But in fifteenth-century Verona, Romeo murdered Juliet in order to secure his position in the Mercenaries, really nasty supernatural guys whose job it is to rip love asunder. Juliet, having been stabbed in the heart by her lover, joins the Ambassadors, who are sent to ensure that love conquers all. Throughout the centuries, when true love is at stake, Juliet and Romeo – and, I assume, other Ambassadors and Mercenaries – are sent to ensure that the either get together, or that one kills the other. Literally, there’s no gray area. It’s one or the other. In this ‘shift,’ Juliet is sent to inhabit the body of Ariel, a girl who is quiet and shy, and due to scars and an overbearing mother, stays to herself as much as she possibly can. A girl very unlike the woman Juliet has become, in other words. Romeo, as it turns out, is sent to inhabit the body of the boy who just tried to have sex with Ariel in order to win a bet.

Jay weaves together several subplots quite well – trying to repair Ariel’s relationship with her mother, maintaining her friendship with the rich, spoiled Gemma, trying to keep Romeo away from Gemma while simultaneously trying to figure out who Gemma’s lover is supposed to be – while also focusing on the main question:  why is this shift different than the others? All of the subplots fit each other perfectly and help build on one another, weaving a very tight story. (At least, for most of the book).

There are points at which I think Jay may have fallen victim to the age-old problem authors have:  when world-building, we tend to ‘know what we know,’ and sometimes that means we forget to explain things to our readers. Even when we edit, we may see those glitches and skim over them – “Oh, yeah, I know what that means” – without stopping to think, “Will the reader know what I mean?” The roles of the Ambassadors and the Mercenaries were clear to me, but I wanted more world-building there. For instance, there is a spell that figures prominently in the plot, but Jay never mentions spells earlier in the novel, nor lays the groundwork for how this one might work. Romeo seems to pull it out of thin air. And I think this was the problem I had with the ending as well – I liked everything up to the ending, and I liked the denouement, but the resolution of the conflict itself was too long, too convoluted, and too confusing. (Also, slightly trite.)

My other major issue with the novel was Juliet’s love interest – I despise, absolutely despise novels in which the hero and heroine fall in love at first sight. There is no such thing. And it doesn’t work on any level, for me. There’s no conflict – internal or external – in things like that. There’s no ‘will they or won’t they’ to add spice to the story. Also, let me reiterate, it’s totally ridiculous. They can’t love each other because they don’t know each other. But Juliet’s love interest was already saying “I love you” on Day 3. Excuse me while I go upchuck.

But. That said, what I liked most about this book is that Juliet and Romeo weren’t stupid. This Juliet is kick-ass and smart. She learned her lesson and learned it well. Jay gives Romeo just enough humanity to make us question just how evil he is, to wonder if he’s capable of redemption.

So if you hate Romeo and Juliet as much as I do and were glad when they both died at the end (and wished they’d done it about two acts earlier), you might enjoy Juliet Immortal.