This week marks the 50th anniversary of “Bloody Sunday,” the day when civil rights activists tried to march from Selma to Montgomery to fight for their right to vote – and were met with violence on the other side of the Edmond Pettus Bridge by armed police.

But I’m not writing about that. Because something much more important happened this week. ISIS decided, for the world, that we should no longer have the historic site of Nimrud. A Biblical Assyrian city, capital of the Assyrian Empire for a time, Nimrud is – was – a candidate for the UNESCO World Heritage Site list. Fat lot of good THAT did.

The city of Nimrud was discovered b 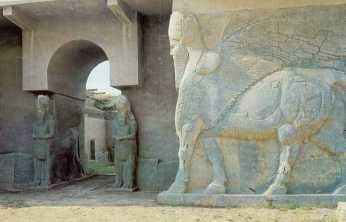 y Austin Henry Layard in the 1840s. The story of its discovery was one of the things that propelled me towards history and archaeology. I loved the idea of finding a city covered by desert, of learning to read the ancient Assyrian texts, the statues and reliefs that told story after story of conquest and expansion. But more importantly, I loved the Assyrian libraries – the fact that even though they loved to conquer others, they loved saving history more. It’s in Assyrian libraries that we find ancient Sumerian texts. It’s in Assyrian libraries that we find documents we can find nowhere else.

Will ISIS someday do the same? Not libraries, obviously, but put their ‘victories’ up on stone walls for all the world to see? For enemies to see, and be terrified by, as they pass through the gates of whatever city ISIS allows to survive to become their capital?

I spend my life trying to make history relevant to students. It’s bloody hard work. I have to fight against prejudice (“History is boring!” “I’ll never need this!”), and previous bad teachers, and the stigma that history is nothing more than names and dates. And nothing could be further from the truth. I take pride in the fact that most of my students are engaged, they care, and I’ve even turned a few into history majors, with a passion for doing for other students what I was able to do for them – make history interesting and most of all, to make it relevant.

So the things ISIS is destroying, they’re just statues, you say? The cities of dead kings? Stone buildings that no one cares about? Bullshit. This is our history. Mesopotamia is where human civilization began. The ancient Sumerians gave way to the Akkadians, the Assyrians, the Hittites, the Hebrews, the Babylonians, and the Persians, and a half-dozen other cultures in between. They traded with Egypt, with the Greeks, and even later with the Romans (before, of course, falling to the Romans). They gave us laws and legal codes. They gave us the first written language. They gave us metallurgy. Stone arches (take that, Romans!). The wheel. Irrigation. The first banks. Long-distance trade. Professional armies that didn’t also have to be farmers or something else. Art. The first work of literature, the Epic of Gilgamesh, which details the Sumerian’s idea of the afterlife. The first poetry known to us. And on.

Without the ancient cultures of the Middle East, we would not have what we do today.

I’m so heartbroken and disgusted by the world’s response. Condemn the destruction? Why aren’t we protecting these sites? Why aren’t we working with the Iraqi government to get the artifacts out of the country, into safe hands? Why did the Baghdad Museum just reopen this week? Are we this stupid? Are we this naive?

I can hear some of you now:  how is this worse than what Hitler did in the 1930s? Trust me, it’s worse. Hitler looted museums, yes, but most of the stolen works were either put into private hands, or sold at auction. Some were destroyed, yes, but not this wholesale destruction we see from ISIS. Hitler wanted many pieces for his own personal museum, which he planned to build after he’d dominated Europe. We are still finding artwork that we thought was lost. It happens all the time.

But if ISIS has their way, there will be no lost artwork to find. It will all simply be in tiny bits and shards. A giant historical jigsaw puzzle that we may – or may not – be able to put together.