I’ve been reading some different things lately. Normally I’m all about historical fiction and paranormal fiction/romance, but this year so far I’ve gone out on a limb, literary-speaking.

It sort of goes hand-in-hand with my constant curiosity about “what makes a bestseller.” It’s something all authors wonder about. What’s the magic formula that creates that New York Times chart-topper? What esoteric spells and sorcery do these writers perform to get it exactly right? What’s the secret?

So far this year, I’ve read Eat Pray Love by Elizabeth Gilbert, The Invention of Wings and The Secret Life of Bees by Sue Monk Kidd, and House Rules by Jodi Piccoult.

(Spoiler Alert! I DO discuss plot points, so if you haven’t yet read these books but want to, you may want to stop now.)

Eat Pray Love was by far my favorite. I’m firmly convinced that you have to be at a certain point in your life before you can ‘get’ this book. You have to be like her (and me):  people who seem to have had everything handed to them, and yet feel unworthy of it, who think they’ve screwed up literally everything they’ve ever touched, who are so mired in depression that they feel there’s no way out – yet there’s this one last desperate spark of hope that won’t let them quit. If you’re not there, then you may not understand this book on the level you should. To me, there’s no mystery as to why this was such a runaway bestseller. Gilbert’s voice is funny and poignant by turn; she leaves nothing out; she’s unflinchingly honest, letting her story and her journey be a path for others.

More of a mystery to me was The Secret Life of Bees. To be honest I finished it only because I paid $13.99 for it. I KNOW there’s something in there that people connect to; if there wasn’t, it wouldn’t be a bestseller. But what? I hate to say it, but I never figured it out. It’s told by 14-year old Lily, who is on the run with Rosaleen, the woman who raised her.  They end up in a small town in South Carolina, where they’re taken in by three beekeeping sisters. Though Lily is white and the sisters (and Rosaleen) are black, and it’s set in 1965, I never truly got the sense of race as it was then. I kept waiting for the real threats to begin. I kept holding my breath, waiting for the angry townspeople to burn down the sisters’ house, or for a mob to attack the boys in jail. But nothing ever happened. I couldn’t decide if this was a young adult novel or not, which bothered me. It had elements of a YA novel, and yet I didn’t think it’s slow pace and lack of action would really appeal to teens. There were also plot holes big enough to drive a coach-and-four through. It felt like Kidd was deliberately skirting around issues, skimming the top when she needed to dive deep. So this bestseller, I never “got.” If you did, can you let me know what it was you liked about it? I’m truly curious to know. 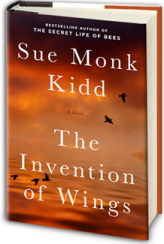 On the other hand, The Invention of Wings doesn’t spare the reader or its characters. The amount of research that went into this book shows through in the tiny details. Again told in the first person, with alternating viewpoints, this novel explores the parallel lives of Sarah Grimke, the daughter of slave owners, and Handful, the slave girl given to Sarah on her eleventh birthday. The central question here is:  what happens when a woman goes against her family – and society – to follow her convictions? There’s real danger here, real consequences for actions; in places, you can almost imagine Kidd chasing her characters, screaming, “No, don’t do that!” This book, I get. It’s clear to me why this was a bestseller. But again, it appeals to the historian in me. If you don’t do historical fiction, this is probably not going to be your cup of tea. 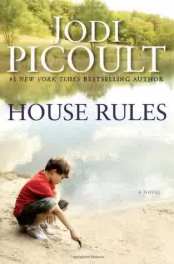 House Rules was the first of these four that I read, and it was also the first novel by Jodi Piccoult I’d ever read. I loved the five alternating viewpoints; it added to the tension throughout the novel. House Rules has one central question at its heart:  what do you do when everyone – including you – thinks your son committed murder? Jacob, the prime suspect, is eighteen and has Asperger’s. He’s also obsessed with forensic science. None of this makes him appear innocent when a girl he knows is murdered.

The one central question in my heart about this novel is:  why didn’t someone just ask Jacob point-blank if he murdered the girl? I hate plot holes like that. No one – not the detective (who should have known better) not his own mother, not his lawyer – ever asked him that. They asked him a million other questions, but never that one question. Did you kill her? I suppose if anyone had asked him that, there wouldn’t be a novel, but that’s exactly what bothers me so much about it:  I hate novels that pivot on one silly point that would have taken literally thirty seconds to clear up, and that most reasonable people would have just done. So while the novel is extremely well-written and researched, I’m not sure I could ever get past that one point.

Four novels. Four very different reactions from me. The only thing I can say is this:  if a novel resonates inside you, if you react to something in it, if you love the characters and sympathize with them, you’ll love and recommend that novel to others. I can well imagine that there are cadres of people out there who hate Eat Pray Love; they can’t relate to it on any level. As hard as it is for me to say, there are even people out there who don’t like Outlander! (As if, right? I know!)

So if you’ve ever loved or hated a bestseller, let me know what it was, and why you reacted the way you did. Not every reader will love every book. That’s why there’s so many authors! But the books that rise above the masses to become bestsellers – I’m still curious as to why, what that secret formula is.

If there is one.