Finally. After many hours. Of driving. And photographing.

I finally finished photographing the entire case file that I’ve been working with for the past two months. I went to Kansas City on Friday with one goal in mind:  finish that last box. I was a robot. Click, click, click. Flip, flip, flip. Page after page. Not reading. Not taking any of it in. I had one box left, and by George (hah!), I was going to finish it.

There were still those moments when I’d flip a last page and see something unexpected. Handwritten letters, mostly, submitted and attached as evidence. Exhibit A. Exhibit B. And those just made me stop in my tracks, and rest my fingers against the pages, realizing that there’s only what, maybe two or three degrees – and 108 years – of separation between me and George Kimmel (or whoever he was). And there was the completely unexpected rabbit hole I got dropped down, too . . . I can’t wait to see where that one takes me.

I was listening to ‘Snap Judgement’ today on NPR; one of the interviews was with a reporter who wrote a story about a doctor who was obsessed with the healing powers of mushrooms — so much that he did truly awful things in order to fund his research. Yet at the end of the interview, the reporter stated that he didn’t think the doctor was a bad man. He may have done questionable things, but they were all with an admirable end goal in mind. Even as I was shaking my head, saying to myself you’re an idiot, dude!, I was actually . . . understanding. Every bit of it.

The more I dig into this case, the deeper and darker it becomes. I remember when I started six – seven? – years ago, with those snippets in the newspaper, I didn’t know what to expect. I certainly never expected that all the people involved in the case — including George Kimmel himself — would turn out to be very questionable, ethically and morally. Six or seven years ago, I expected that this case would be more black and white than that. There’d be a good guy, and a bad guy, and the truth would come out, and the guilty parties would be punished.

Nearly every file I photographed proved to have at least one surprise in it for me, in a case that I didn’t think could surprise me anymore. Take George’s sister, Edna, for example. She held $25,000 in life insurance, paid out once George had been missing for seven years — and yet, when her uncle told her to sign over the policies to a local bank (that he managed), she did it without question. Was she in on it? Or was she so under his thrall that she literally didn’t question it? Where was her husband in all this? No idea. None. Not yet. 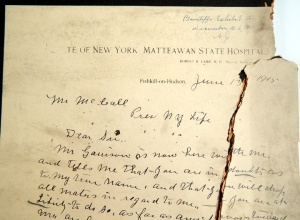 Yesterday, the surprises came in the form of handwritten letters, from “Kimmel” (I use quotes here because no one is sure that the man who showed up in 1906 was really George Kimmel or not). Some were lucid, neat. One was a sprawling, scrawled mess of bad spelling and shaky hands. I didn’t have to read it. I picked it up out of the box, my hands shaking a little, and just stared at it for a while, stunned. This was not a well man. Was he ill? Was he scared? Was he drugged? I don’t know.

As exhausted as I was yesterday, I still found myself wishing that I could just take time with the letters. Sit with them for a while. Look at them. Study them for stray fingerprints, for smudges, for some hint of the person who wrote them. These primary documents are the only way in which we can make a real connection to the person we’re researching. And in a very real way, they may be one of the few clues I have as to this ‘mystery man’s’ real identity. Comparing hand writing and word usage and sentence structure — those are nearly as good as fingerprints. But more than that, it’s that these letters are a way to worm my way into this man’s head. Figure out what he was really thinking. Was he a con artist pretending to be George Kimmel? In that case, why? Was he really George Kimmel, hiding from a murderous family? In that case, why come forward? Those are the questions I ponder as I look at those letters, study these depositions, dig deeper into this case. They’re the questions that will keep me moving forward.

So yes. This case file is done. But there are more to find. And that’s one of the greatest perils of historical research:  becoming obsessed. Never knowing when enough is enough. Getting lost. But if not for obsession, would any of us write? It’s hard work. Something has to drive us, chivvy us, herd us towards that end goal. Obsession is as good a reason as any.

2 thoughts on “Digging Deep: The Perils of Historical Research”