I know! You’re thinking WHAT do those two things have to do with each other? But if you were in Wichita last night, and you were one of the 2,100 people who saw Stephen King, then you know exactly what it means — it was the opening line to his opening joke.

That was as far as the joke ever went, by the way. 🙂

I’d had my ticket to see Stephen King since they went on sale a month ago. He was only schedule to do 6 stops on this particular tour, and Wichita was one of the stops. I HAD to go. I’m not the biggest King fan on earth, but his book On Writing is my Bible. I love his sense of humor, and his voice.

Then on Monday, I got a call from a friend. Did I want to volunteer as an usher for the event? When she mentioned I’d get a seat in the main auditorium — rather than maybe getting stuck in the overflow room — I said sure.

In retrospect, I will say this:  there were people who deserved that more than me. Real Stephen King fans, who adore him and his works. I’ve read a few of his other novels, particularly Misery, Needful Things, Salem’s Lot, and Christine. Christine, in fact, became the name of my ’66 Mustang, which tried to kill me on numerous occasions before I sold it. But it was On Writing that made the most impact on me, and so I became an usher.

There is only one way I can describe last night.

It was a rock concert.

For an author! For books!

The line — first, well, here’s my really bad photo of the line, but it was completely around the building when I arrived at 3:30. (This is the back of the building.) And people were still arriving. Later, I talked to people who had been there since midnight. Midnight! And yesterday in Wichita was freezing. High of 31 degrees, wind chill of about 20.

But once they got inside — !

I’ve been to concerts before. There’s an electricity in the air; everyone is 100% focused on why they’re there. The excitement is contagious — it’s magical. You could create a tulpa with that kind of dedicated energy. That’s what this was like. They didn’t complain about security; they didn’t complain about the wait; they didn’t complain about the lines in the bathrooms. No one ever took anyone else’s seat. No one ever got mad (well, except for the one woman who just about ripped apart the media people, who had planned to set up Right In Front of Her. But that was understandable, given the fact that we all had just about ten seconds — from the time Stephen King walked through the curtains until he got to the podium — to take photos. It would have been very nice, Mr. King, i 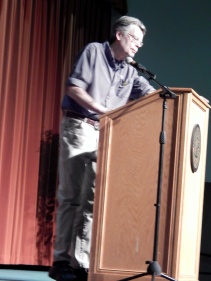 f you could have spared another 30 seconds for that, especially for the poor schmuck (me) who had to duck down when everyone else started taking photos, too). Because this is the Really Bad Photo I took.

I talked to a woman who drove in from Arkansas. One who flew in, that morning, from Texas. They had talked to someone who came from Indiana, and I know there was a couple from California. People were exchanging emails and phone numbers, and friending each other on Facebook. The early-comers had about a two-hour wait. For each and every second, they were polite, quiet, courteous, friendly, and just so happy to be there. (Inside. Thawing out.)

No other way to say it. He Arrived. And you could tell, even from 70 feet away like I was, that he was just as excited by the crowd as the crowd was by him. A symbiotic relationship. These people knew him, and knew his books, and knew why they were there — to be in the presence of someone they adored and idolized.

It was just like a rock concert. Seriously.  At one point, he mentioned one of his books and the crowd erupted into cheers — “I love it. I say the title of a book, and you guys clap!”

He told a story about needing to fix his motorcycle. He had just gotten it to the driveway of the repair shop when it died. So he walked up to the house/garage, and out of the garage came this giant St. Bernard . . .and the people went crazy. Because they knew! This was the origin of one of their favorite novels, from the author himself, and they were getting the story firsthand. Not from an interview. Not on NPR or in Writer’s Digest. but from Stephen King himself. Not only was it their own inside joke, but it was one that they were all sharing at the exact same moment.

Yes, I took notes. Because one other thing I love about Stephen King is that, like me, he writes without a plan in mind. Or, in his words, “I assume the ending will be there.”

His analogy, which I loved, was this:  visualize a mouse hole in a baseboard, with a red string sticking out of it. Pull on the string, because the string is your story. If you’re lucky, you’ll get it all, and you’ve got your novel/novella/short story. Sometimes, he admits, “the string breaks.” In other words, the story goes nowhere, and you’ve wasted some material – but I don’t think he ever feels that the time was wasted. How could it be, after all? Writing is writing. Even if the story goes nowhere, or goes nowhere for now, you’ve learned something from the process. You’ve written.

And on those lines, here’s another great gem:  “You don’t try to steer the story. You let the story tell itself.” Here, he gave a great example — his vampire novel Salem’s Lot. Did you know that originally, King planned for the vampires to win? But, he said, some of the characters were stronger than he thought they’d be, and they defeated the vampires instead. “And that’s fine, too” he said. “I like a happy ending as much as anyone!” Knowing that someone as great, as prolific, as Stephen King can write novels without a plan or ending in mind, in which he trusts his characters to do what they need to do and develop how they need to develop, is freeing, for me. It should be for you, too. 🙂

Like all great experiences, this one was too short. Just an hour. And then He Left.

And so did the people, after a mad — yet polite — scramble to gather their books. Every now and then, there was a happy scream from someone who’d gotten one of the few signed copies. (Before anyone asks — NO. I did not get a signed copy. Even being an usher didn’t grant me privileges that great.)

But he left me feeling even more in awe of this thing that we do, this writing life we lead. Because without readers, we are just that — writers. It’s the readers that make us authors. Being there, in the presence of so many fans, some of whom had traveled thousands of miles to see Stephen King, made me very humbled — and hopeful that someday, maybe, my own novels can deserve that kind of fervor.