I’ve been thinking a lot about cars lately. I love cars. My dad used to custom-build race cars, and he restored his own Model A. My dream is to rescue a ’76 Triumph Spitfire and restore it (along with several other British cars like the Jensen, the Sunbeam Alpine, the Sprite, the . . . ) 🙂 Plus, I’ve been researching them for my YA novel, looking at exactly how you drop a large engine in a small car and modify it so that it isn’t immediately apparent what you’ve done, and how that affects the rest of the car’s body and its performance.

I’ve also been rewriting the first two books of my urban fantasy series. I just finished rewrites on the first one, and it went to my betas on Thursday (YAY!); now I’ve started on Book 2, which used to be Book 1. And what I have, I realized, is a great big rust heap. 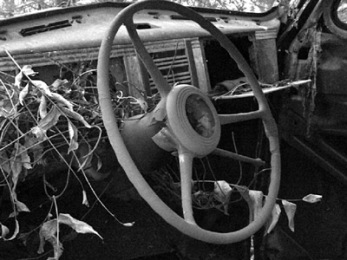 When you get an old car, nine times out of ten it’s not complete. You might have a body and frame, but no engine or transmission. You might have a frame OR a body, and maybe the transmission but no engine or interior. So you have to go to swap meets, get online, find other “parts cars,” and sometimes manufacture things yourself. That’s where I am with this novel. So much of it has to change — not only is it going from third person to first, but the entire timeline is changing, getting shorter. That means a lot of scenes have to go, or be rewritten and re-purposed. Moved elsewhere. Some of it simply isn’t usable.

What I have is a frame — the basic story line, the plot, the characters. And I’ve got the engine and transmission — the conflict, the inciting incident, the rising tension. I have a few doors and instruments, and a steering wheel — scenes that I can rewrite and use.

Now, I have to go find my parts cars. Dig through old drafts and locate things that might be usable. Those, I can slowly weld together. Rough at first, yes. Welds always are. But then you sand down the seams — your rewrites, your transitions between scenes. You make sure everything’s aligned — all your scenes are in place, everything’s been referenced in the right order, the story progresses naturally and chronologically.

After several drafts, you have something that looks like a story, just like when you get the body put on the frame and the engine and transmission dropped in, you have something that looks like a car. But are you done? Nope! Let’s say that car’s been sitting in a field for forty years. Mice and rats have eaten the upholstery and wiring. Hail finally broke out the windows. Rain ruined the walnut dashboard and rusted out the floorboards. All that has to be replaced, brand-new. Just like I have scenes that will need to be written fresh, just for this novel. So now I get to do all new wiring. Order the new dash. Pick out the upholstery color and material. Make it all match the original, as close as possible. Of course, this isn’t going to be original — we’re going custom. So I have a little leeway with a few things.

Some people would be happy with that. The car’s now running. You have seats and headlights — it’s done, right? No! Now, you have to choose the paint, put on several coats to get that deep, glossy finish, sanding it down between coats to make sure the next one goes on just right. You have to make sure every stitch in the interior is exactly right. That the stain on the woodwork is even, deep, glossy, satin-smooth. This is coachwork. This isn’t an assembly-line, cookie-cutter car. This is your novel! It shouldn’t be like anyone else’s, and it shouldn’t be less than perfect. Not a single flaw can be allowed to exist in the finish, or in that walnut dash. The engine must be spotless. The pinstripes, absolutely straight; no drips, no differences in the thickness of the lines, no hesitations. This is the editing phase. Just like this attention to detail is what separates a good car from a concourse car, this same attention to detail is what separates the okay novel from the great one.

I remember when my dad brought home his Model A, it was nothing more than a frame, two doors, and pieces of a rusty engine. My mom looked at it and said “What the . . .?!” But he knew what it could be. He had a vision for what it would look like, already. That’s where I am with this novel. I have a lot of parts sitting around, but I know where they need to go and I know what I need to do in order to restore it properly.

One thought on “Is Your Novel a Rust Bucket? Mine Is!”